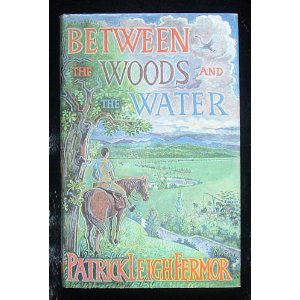 I have recently finished reading the fantastic ‘Between the Woods and the Water’ - Patrick Leigh Fermor (A title I liked so much I nabbed and, with out meaning to, para-phrased for this blog).

In 1933, between the wars, the eighteen year old Leigh Fermor under took an expedition on foot across Europe from The Hook of Holland to Constantinople in Turkey.  Between the Woods and Water is the middle part of his record of the journey which and documents his travel across Hungary and Romania (including Transylvania).  The book is an amazing document of what those countries were like in a period now lost to history and an interesting education in the much more distant history of that part of the world. Beyond that it is a wonderful tale of his adventure, the people he met and the places he went.
I was particularly interested in his very minimal kit which he carried with him. Despite the fact he was often a guest in a châteaux or castle or other comfortable quarter he also spent nights in hay stacks and under beech trees.

“…and my kit seemed in as good repair as the first day in Holland. The ammunition boots from Millets in the Strand, crunching along on their only slightly blunted hobnails, were still good for unlimited miles. The old breeches were soft with much ware and cleaning, and every stitch was intact; only the grey puttees had suffered minor damage, but nothing showed when I had snipped off the ragged edges where snow and rain had frayed them. A grey shirt with the sleeves rolled up completed this marching gear. (I was darkening to the hue of a teak sideboard, with hair correspondingly bleached by the sun) I blessed my stars that my first rucksack, with its complex framework and straps, heavy water-proof sleeping bag and White Knight superfluity of gear had been stolen in Munich; the one my Baltic Russian friends had bestowed was smaller but held all I needed; to wit; a pair of dark flannel bags and another light canvas pair; a thin, decent-looking tweed jacket; several shirts; two ties, gym-shoes, lots of socks and jerseys, pyjamas, the length of coloured braid Angela had given me; a dozen new handkerchiefs (as we know) and a sponge-bag, a compass, a jack-knife, two candles, matches, a pipe-falling in to disuse-tobacco, cigarettes and - a new accomplishment – papers for rolling them, and a flask filled in turn, as the countries changed, with whisky, Bols, schnapps, barack, tzuica, slivovitz, arak and tziporo. In one of the side pockets there was a five-shilling Ingersoll watch that kept perfect time when I remembered to take it out and wind it up. The only awkward item was a soldier’s greatcoat; I hand’t worn it for months, but felt reluctant to get rid of it. (Luckily it was perfect for sleeping out, and, folded into a tight sausage and tied round the top of the rucksack, scarcely visible.) I still had the Hungarian walking-stick, intricately carved as a mediaeval crosier, the second replacement for the original ninepenny ashplant for the tobacconist’s of Sloane Square. Apart from sketch –book pencils and disintegrating maps, there was my notebook-journal and my passport.”
To Summarise:
What a long journey he travelled with such a little inventory. It just goes to show that you don't need more than a worn in pair of stout boots and a pack with a useful knife and a few other items to get you down the road.